Hollywood’s legendary actor, Robert De Niro, is set to bring Nobu Hotel + Restaurant to Greece! Along with celebrity chef Nobu Matsuhisa, the hotel is set to open in Greece in the spring of 2022 according to Travel + Leisure Magazine. The founders of Nobu Hotel and Restaurant are Japanese celebrity chef Nobu Matsuhisa, Robert De Niro, and Meir Teper.

The Nobu brand was founded over 25 years ago, started in Los Angeles, with Japanese chef Nobu Matsuhisa’s first restaurant, called Nobu. Robert De Niro ate at the restaurant and fell in love with Matsuhisa’s innovative approach to Japanese cuisine with Peruvian ingredients. He offered a business deal to Matsuhisa which would involve opening up a Manhattan restaurant together. Matsuhisa who is a perfectionist rejected the deal because he felt that his Los Angeles restaurant was not yet perfected. He wanted to ensure that his first restaurant was working at its finest before expanding. De Niro respected the chef’s rejection, and kept his offer on the table. Matsuhisa later reached out to him, when he was ready, and the two opened up the Manhattan restaurant together. Nobu has expanded outside of the US opening up luxury restaurants across the world in cities like Beijing, Istanbul, and Mexico City. 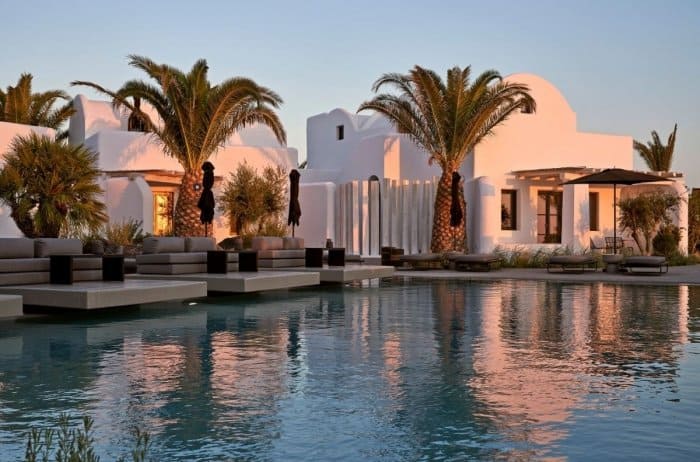 De Niro’s Nobu Hotel will reportedly open in Santorini’s northeast coast in the beautiful Imerovigli. The Nobu Hotel and Restaurant in Santorini will come equipped with a signature Nobu Restaurant, luxurious spa, fitness center, two-level infinity pool, and five over-the-top pool villas that each offer panoramic views of both the Caldera and Aegean Sea from its clifftop. The hotel is located  just 20 minutes from Santorini (Thira) International Airport and sits along the famed hiking trail that runs between Oia and Fira, Santorini’s capital.

“We are very excited to be coming to Santorini and to work with the local community on this exciting project. Santorini is one of the most highly regarded destinations in the world with its rare beauty, famed for its distinctive cuisine, whitewashed architecture set with a backdrop of steep cliffs, and dramatic sunsets lighting the sea and sky. We look forward to inviting locals and international travelers alike to experience the Nobu lifestyle in this special destination.” – Trevor Horwell, CEO of Nobu Hospitality, in a statement released to Travel + Leisure.

Famous Greek French Journalist Nikos Aliagas interviewed Robert De Niro back in 2012 as he was vacationing and he expressed his love for the Greek islands.

“It’s been great. Terrific. I will come back. I will see every island in Greece that there is…in the next few years” – Robert De Niro