At 9 years old, Greek-American William Maillis is like a lot of other boys his age, enjoying video games, knock-knock jokes, sports and hanging out with friends. But William is no ordinary kid when it comes to academics. In May, Will graduated from high school and is now a college student already working on his own theories of how the universe was created. Most other 9-year-olds are in fourth grade.

William, who lives in Penn Township, Pennsylvania, is among the youngest people ever to attend college.

He’s currently taking a full slate of classes at Community College of Allegheny County as a way to ease into life as a college student and plans to enroll next fall at Carnegie Mellon University in Pittsburgh, according to his father, Peter Maillis, a Greek Orthodox priest.

“It doesn’t bother me” being the youngest student in class by far, William tells PEOPLE. “I’m used to it by now.”

William, who wants to study the physics and chemistry of space, earn a doctorate degree and work as an astrophysicist, is at ease tossing around concepts like “displacement of space-time” “singularity” and “pure gravity” as he patiently attempts to explain why black holes aren’t “super massive” as theorized by such other brilliant minds as Albert Einstein and Stephen Hawking.

Bottom line, according to William: “I want to prove to everybody that God does exist,” he says, by showing that only an outside force could be capable of forming the cosmos.

Maillis said he and his wife, Nancy, who also are parents to a daughter, 29, and son, 26, – “[William] was our 17-year-surprise,” Maillis says with a laugh – realized their young son was advanced when he started accurately identifying numbers at 6 months old and speaking in complete sentences at just 7 months old, he said.

He followed with a range of impressive academic feats, including doing addition at 21 months; multiplication, reading and writing at 2 years old; algebra, sign language and reading Greek at age 4; geometry at 5 and trigonometry at 7. 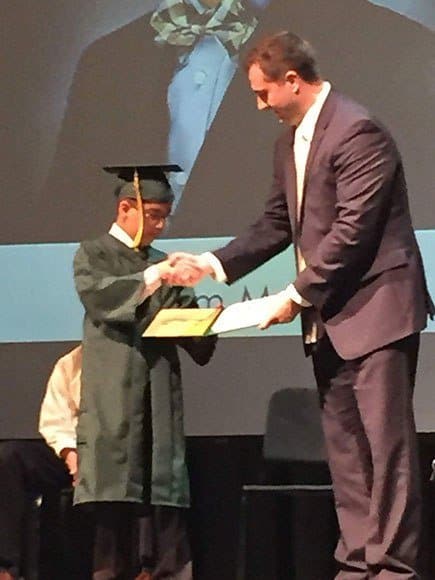 Maillis then consulted with a college psychologist who studies whiz kids and she declared him a “pure genius” after administering IQ tests, he says. The elementary school reconsidered and allowed him in.

Maillis says he and his wife allow William to take the lead in deciding what areas of interest to pursue. “Whatever classes he wants to take, that’s okay with me,” Maillis says. “I don’t want to push him.”

William’s history professor, Aaron Hoffman, says the boy fits right in with his other college students. “We haven’t steered away from any topics: Hitler, Mussolini, the Holocaust, wars,” Hoffman says. “If he’s here for college, he’s going to get college-level material.”

The only difference he’s noticed, Hoffman says, is that William doesn’t take notes like the other students, but simply listens, reads and absorbs the material.

Through it all, Maillis says his son remains grounded. “I just want him to appreciate the gift he has, which I think he does,” Maillis said. “I tell him, ‘God gave you a gift. The worst thing would be to reject that gift and not use it for the betterment of the world.’