From Ancient times to modern day, the Greeks have always amazed the world with their endless inventions and accomplishments. Below we present the most amazing Official Guinness World Records set by Greeks.

The largest skewer of Gyros meat weighed 4,022 kg (8,866 lb 15 oz) and was achieved by Zith Catering Equipment LTD and the Municipality of Pafos (both Cyprus) in Pafos, Cyprus, on 31 December 2008.

The largest Greek Sirtaki (Folk) dance was achieved by 5,614 people in an event organised by EKPOL, the Social and Cultural Council of the Prefecture of Magnesia, in Volos, Thessaly, Greece, on 31 August 2012

The 2,000-year-old Antikythera Mechanism was discovered in 1900–01 in a shipwreck close to the Greek island of Antikythera. It is a collection of bronze gears encrusted with sea accretions, built with a mechanical complexity that has not been demonstrated in any other object prior to the 14th century. It is regarded as the oldest analog computer and is believed to have been able to predict eclipses.

The earliest collection of written articles about medicinal herbs and plants is the De Materia Medica, compiled by the Greek surgeon, Pedanios Dioscorides, in approximately 77 AD. Dioscorides was a Greek physician from modern-day Turkey who gathered his information during travels through Europe and North Africa with the Roman army of Emperor Nero. De Materia Medica was originally written in Greek.

The writer of the first dictionary is thought to be the ancient Greek philosopher Protagoras of Abdera, who in the 5th century BC compiled a glossary of difficult words encountered in the writings of Homer. 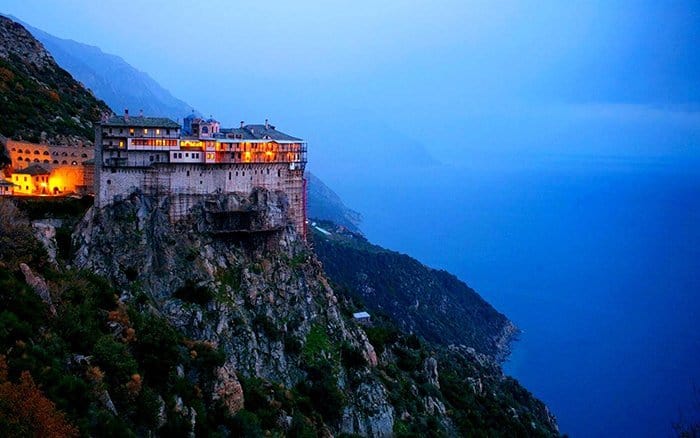 Mount Athos is an autonomous republic, with an area of just 336 km and a population of 4,000 (1997 estimate).  Included within Greece, which recognizes its autonomy, the republic is a long, mountainous promontory occupied by 20 Greek Orthodox monasteries and their dependencies. Its government is the Holy Council comprising one representative from each of the 20 monasteries. Under the terms of a law dating from 1066 Mount Athos is inaccessible to all females, adult or child, including the female of any species of domestic animal. Women are also not allowed to approach the shores of the monks’ republic by boat.

Kanellos Kanellopoulos (Greece) pedalled his Daedalus 88 aircraft 115.11 km (71.52 miles) from Heraklion, Crete, to the Greek island of Santorini on 23 April 1988. His epic flight lasted 3 hr 54 min 59 sec before an offshore gust broke off the plane’s tail and it crashed into the sea a few feet from the shore.