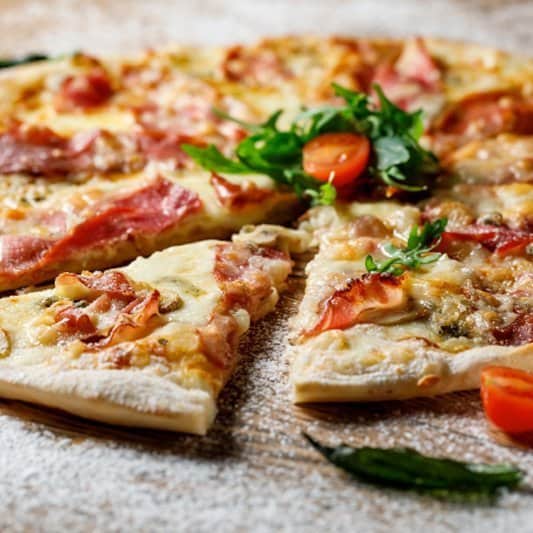 When we think of pizza, we think of Italy. Most believe the Italians invented pizza. However, the Greeks invented a flat bread called “Plankuntos” some 2700 years ago.

The idea of a flat piece of dough topped with herbs and cheese originated in ancient Greece. There is historical evidence that Greeks ate a flat bread called πλακούτος (plakuntos) — “flat” — which was topped with olive oil, herbs, onion, cheese and garlic and then baked in a mud oven.

The Romans, who adapted many Greek customs and habits, naturally adopted the idea of baking plakuntos in the oven after putting the ingredients of their choice on top.

Italian folklore says that pizza as we know it today originated in a primitive form in Naples as the food of the poor. The original ingredients were simply flour, water and a tiny bit of tomato paste on top. If there were more ingredients available, they would be added on top of the tomato paste.

Being such a symbol of the nation, naturally Italians had to try to pinpoint the exact birthdate of this great food. Naples Baker Raffaele Esposito is often given credit for creating the first pizza pie to have cheese as well as tomato paste as toppings.

Italian historians note, however, that flat breads with a variety of toppings had been sold by street vendors and eaten by the poor workers of Naples before Esposito’s time.

Legend has it that Esposito was invited to make a grand pizza for Italian King Umberto I and Queen Margherita when they visited Naples in 1889.

That pizza, which featured fresh tomatoes, mozzarella cheese, and basil, is known today as Pizza Margherita. And, as anyone who has traveled to Italy knows, Italians are very proud to note that the red, green and white colors of the Margherita are reflected in the nation’s flag.

In the 19th century, Italian immigrants brought  the concept of the pizza along with them to France, England, and the United States.

Pizza as a street food became very popular in the United States and New York City in particular. From there, especially in the years after WWII, it was exported back to Europe and the rest of the world.

G. Lombardi’s, the very first pizzeria in the world, was opened in 1905 by Gennaro Lombardi at 53 1/3 Spring Street in New York City. Amazingly, it is still open today and uses its original oven, although the restaurant has changed locations.

Today, pizza is one of the most beloved foods around the world, yet American-style pizza has had a mixed reception in Italy. If you travel there and go to a traditional Italian restaurant away from tourist areas, you will not find pizza on the menu.

But if you are in a tourist area in Italy, pizza is advertised in every eatery, mainly because American tourists cannot imagine Italy without their beloved version of pizza.

In contrast, Greece has wholeheartedly accepted the American-style innovations to the ubiquitous food. In the place where pizza had its ancient, humble origins, American-style pizza has become a favorite food for many.