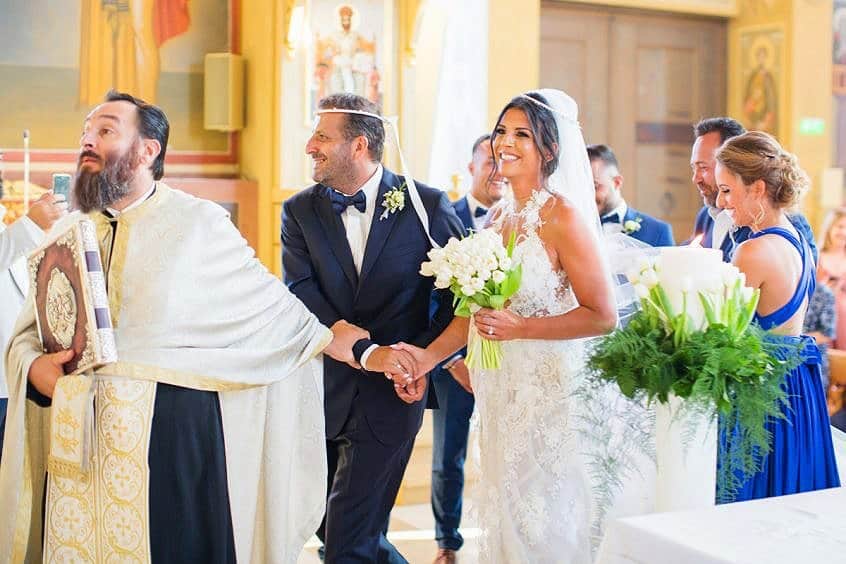 You know what to expect at a Greek wedding if you grew up in a Greek community or the Greek Orthodox Church. If you’re going to a Greek wedding for the first time, there are some things you should know about the symbolism in an Orthodox ceremony, as well as the customs and traditions that make a Greek wedding so special.

“Vows are not exchanged in the Orthodox Church since the couple’s pledge to God is to care for one another,” Father Papadopolous explains. “They swear to God that they will adore him without conditions. This is why the couple does not face one other, but rather faces ahead to the altar, or Christ. The wedding ceremony is traditional, but not rigid.”

It is important to remember that Greek Orthodox weddings are very similar to other Orthodox Christian weddings in countries like: Cyprus, Russia, Serbia, Georgia, Ukraine, Ethiopia, Armenia, Egypt, Bulgaria, Albania, Belarus, Montenegro, and more. Greek couples are not permitted to get married in a Greek Orthodox Church on the following dates: 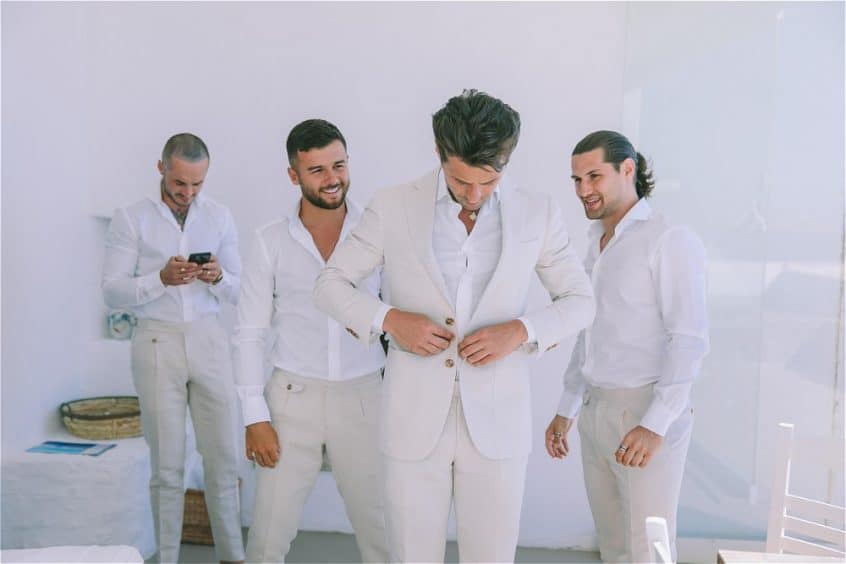 The couple (who must both be Orthodox) must designate Orthodox Christian wedding sponsors who are in good standing with the Church, according to the Greek Orthodox Church. They will serve as the couple’s advisors during their marriage and are likely to be godparents to the couple’s children. The Koumbaro is the union’s male sponsor and always the best man.

The Kounbara is the female and will be the maid or matron of honour. Non-Orthodox guests are welcome to attend the wedding, but they cannot serve as sponsors. The silver tray on the wedding table that holds the bride and groom’s crowns and rings was customarily given to the pair by these sponsors. Many couples nowadays prefer not to accumulate silver, therefore the silver tray may not be used. The “Stefana”crowns, rings and 2 “Lambathes” white candles are required to be on the wedding table. 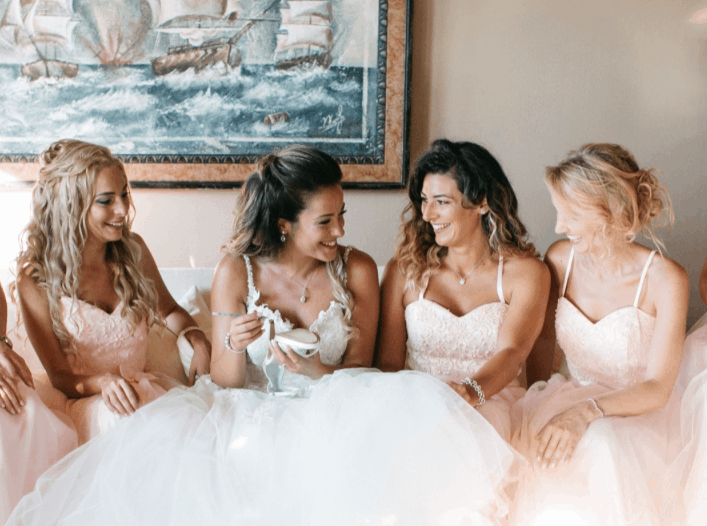 The groom (in some parts of Greece) gives the bride her wedding shoes as a present. While she is getting ready, the Koumbaro gives them to her, and then a full charade ensues as the bride argues that they are too huge. The Koumbaro fills the shoes with money till she is satisfied with the fit. Finally, all of the bridesmaids who are not married write their names on the bottoms of their shoes. By the end of the wedding night, the names that have worn off the shoes are believed  to be married soon.

4. The Sacrament of Marriage

The ritual is rich in symbolism as one of the seven sacraments of the Greek Orthodox Church and one of the oldest Christian wedding rites. The wedding is divided into two parts: the Betrothal Service and the Crowning Service. The latter is divided into five sections: Prayers, Crowning, Scripture Readings, Common Cup, and Isaiah’s Dance. To signify the Holy Trinity (God the Father, Christ the Son, and the Holy Spirit), rituals in the sacrament are performed 3 times.

5. Service of Betrothal and the Exchanging of Rings

The swapping of rings is the Betrothal’s symbol. In the name of the Holy Trinity, the priest blesses the rings three times and proclaims that the groom is engaged to the bride. The rings are placed on the groom’s and bride’s right-hand fingers by the priest. Yes, it’s the right hand, not the left, because the right hand is associated with virtue in the Bible.The Koumbaro then exchanges  the rings 3 times between the couple, symbolising how the Holy Trinity has linked their two lives into one. They are now legally betrothed to marry in front of God. 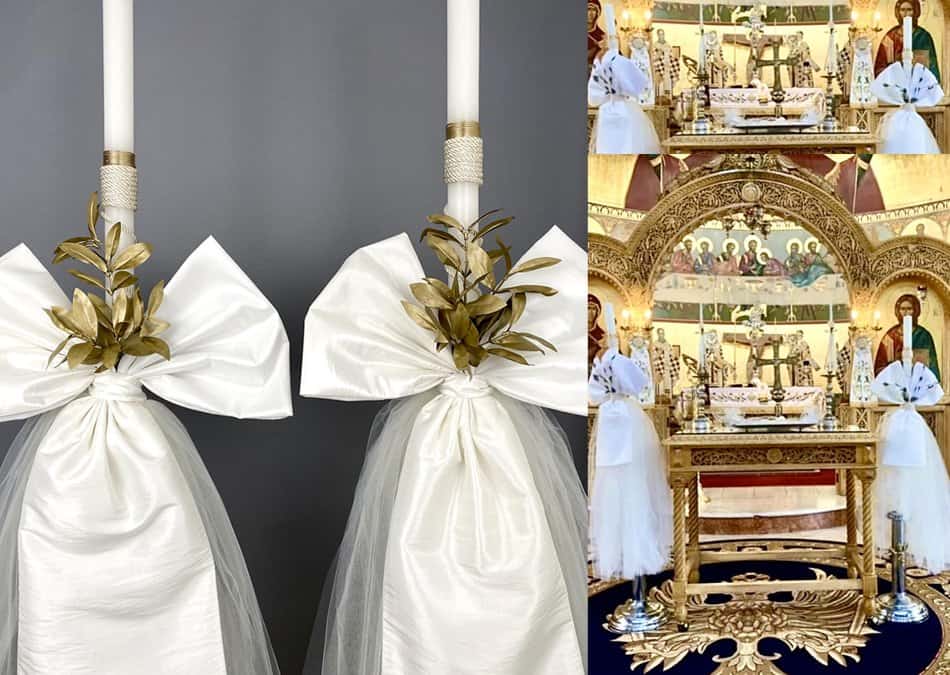 The lighting of the candles and the Joining of the Hands kick off the wedding ceremony. Lambathes (taper candles) are offered to both the husband and the bride. The candles are lit to represent the couple’s willingness to welcome Christ, who will bless them at the sacrament. Shop the most beautiful Lambathes online

The priest joins the groom’s and bride’s right hands in prayer, asking God to unite the bride and groom’s minds and bodies. Prayers are recited, asking for a long and happy life filled with health and happiness. To demonstrate their unity, their hands will remain joined throughout the service

8. The Crowning of Stefana 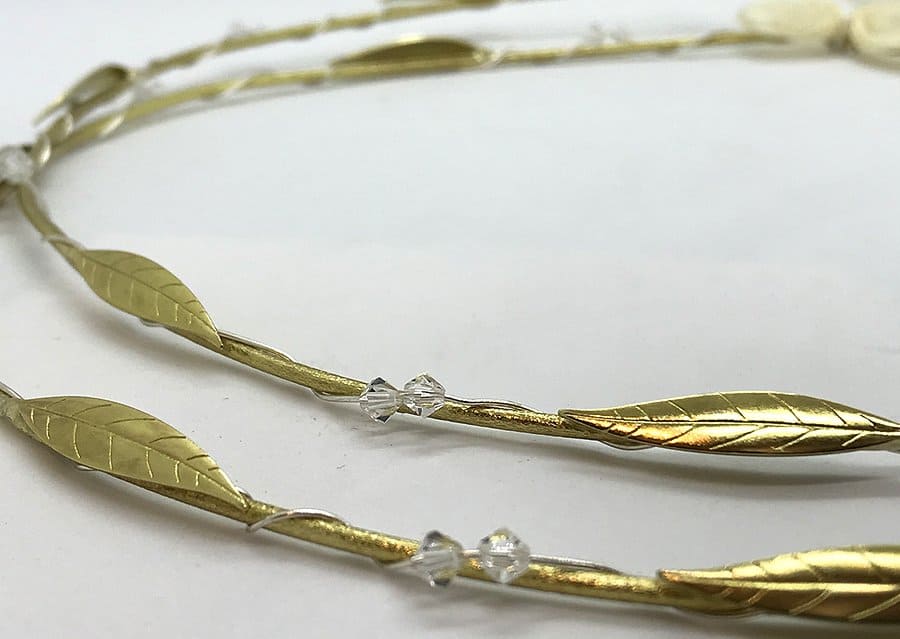 “The Crowning” is the most important part of the sacrament. Two crowns, known as Stefana, are connected by a single ribbon. God crowns the groom and bride as king and queen of their home and founders of a new generation when the priest places them on their heads. The Koumbaro or Koumbara exchanges the crowns three times on their heads. Shop the most beautiful Stefana online

The 1st reading from Scripture is from St. Paul to the Ephesians (5:20-33), describing love and respect. The 2nd  by St. John (2:1-12) speaks about Christ’s first miracle changing water into wine at the wedding Cana of Galilee.

The groom and bride will drink blessed wine from the same cup or goblet in honour of the Cana miracle. This deed denotes that by sharing everything in life, their delight will be multiplied and their sufferings will be cut in half.

The priest leads the couple in a ceremonial promenade called the Dance of Isaiah, holding up the Holy Gospel book. The Koumbaro follows closely after, clutching the ribbon that connects the Stefana crowns, demonstrating his support for the pair. Their first steps as husband and wife are commemorated in this “dance.” This is done 3 times around the wedding table.

The priest removes the crowns and prays to God for them to live a long and happy life. He then elevates the Holy Gospel book, bringing it down between the couple’s joined hands as a reminder that only God can keep them apart. It’s a spiritual reference to the fact that if they start to drift apart, Christ will always be their way back to each other through the Gospel. A first kiss is not part of the Orthodox service, however, priests allow the bride and groom this expression of love.

Koufeta are almonds that have been coated in white sugar (Jordan Almonds). The egg shape indicates fertility and new life, while the white symbolises purity. The firm nut represents marriage’s persistence, while the sugar coating represents a delicious life together. The bride and her bridesmaids always wrap an odd number of koufeta in netting or bonbonnieres as wedding favours. The odd numbers are indivisible, therefore they represent the couple’s undivided love. It is customary for single unmarried Greek women to tuck koufeta under their pillow in order to be next to find her future husband.

14. The Tradition of Greek Dancing at Reception 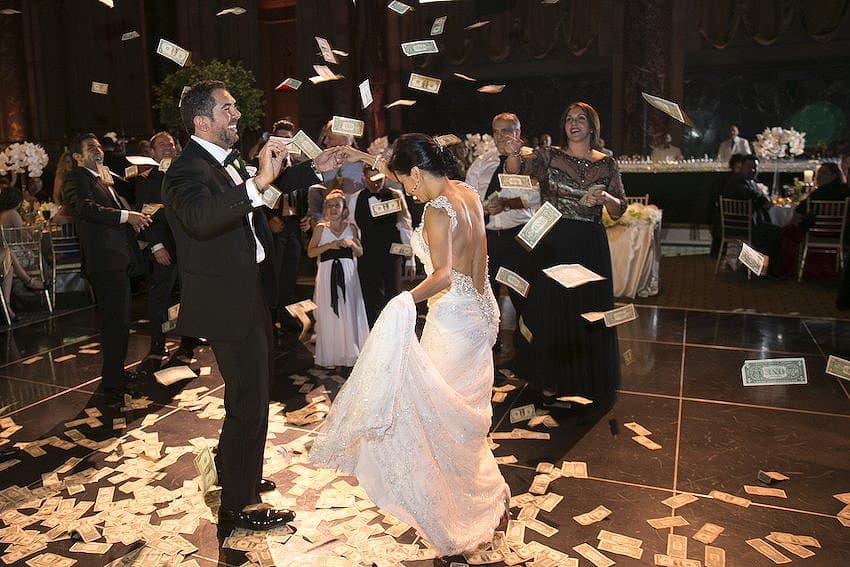 There is always a Greek band or DJ that will play Greek traditional songs and amazing group dance circles make their way around the reception space. The majority of Greek wedding receptions are a blend of music styles and generations, paying tribute to their Greek backgrounds and traditions while also celebrating in a contemporary manner. There is an old tradition in rural Greek villages of pinning money to the bride’s clothing at the reception during a particular dance. Often seen at Greek Cypriot weddings. In North America, this custom is more akin to a gift “showering.” When the couple dances in front of the circle, the guests will throw a whole wad of bills at them. Especially during the bride’s first dance called the “Nifiatiko”. It’s optional for guests to participate, but you should bring a few bills if you want to join in the fun festivities. The “making it rain” of money symbolizes helping the couple be strong, healthy, and to kickstart them becoming established in life.

There are many pre Greek wedding traditions that we can’t possibly list them all. Here are some that you may have heard about or seen. The last one will definitely have you scratching your head, or should we say…dusting it off!

Making of the Marital Bed: Family throw money onto the bed to symbolize prosperity and good luck. Shaving of the Groom: The Groom is shaven by the koumbaro in many central Greek village traditions. 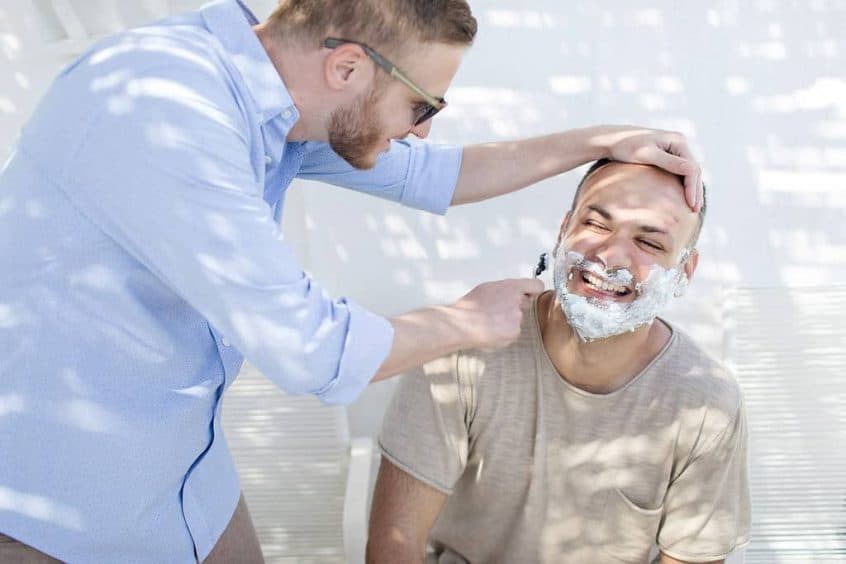 Throwing Flour on the Bride and Groom:  A less common (somewhat odd) tradition that takes place at the bride’s pre wedding house party. Guests throw white flour on top of the heads of the bride and groom to symbolize prosperity and growing old together. This is a tradition from certain villages in Thessaly and only in Central Greece. Opaahhhhhhhh!