Featured in a video by Business Insider, Hatziparaskos has gone viral in a video crafting some of Greece’s beloved handmade phyllo alongside his only employees — his wife Katerina and his son Paraskevas.

The 86-year-old baker from Crete, Giorgos Hatziparaskos, is one of the last people in Greece who still makes the country’s famous multi-layered phyllo dough by hand.

Hatziparaskos is seen in a video by Business Insider, alongside his only staff, his wife Katerina and his son Paraskevas, crafting some of Greece’s beloved delicacies by hand.

In 1960, long before the emergence of large-scale, commercial baked goods, which had replaced traditional bakeries in much of Greece and around the world, Hatziparaskos opened his bakery.

While many other small family bakeries closed after the emergence of cheaper, mass-produced goods, in order to raise profits, Hatziparaskos decided to highlight his bakery as a tourist attraction for the large number of travellers who visit Greece every year.

He opened the doors to lovers of sweets from around the world at his traditional bakery in Rethymno, Crete, allowing them to glimpse the traditional pastry-making activities 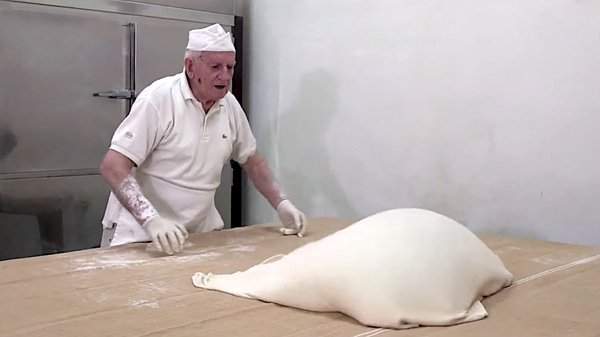 Restaurants and hotels have bought large amounts of hand-made phyllo in the past to be included in their menus. Today, since it is much cheaper than traditionally manufactured dough, they all buy factory-produced phyllo dough, and many more sheets can be produced by machine than by hand in one day.

In addition to phyllo, Hatziparaskos also produces kataifi, a special pastry that is used in typical Greek sweets such as ekmek kataifi, made from very thin strips of dough. By carefully putting lines of raw dough on a spinning, heated wheel until they are baked through, Hatziparaskos makes the spaghetti-like pastry the traditional way.

While the workshop has been a pillar in the town of Rethymno for decades, due to the reduction in tourism to the country due to Covid-19, the family company has suffered a significant loss.

Once bustling with tourists hoping to catch a glimpse of the family making their phyllo treat, the bakery unfortunately had very few visitors due to the devastating pandemic in 2020.