There has been controversy lately regarding the ethnic origins of Cleopatra. Since the Superwoman actress Gal Gadot announced she will play Cleopatra in an upcoming Hollywood movie many Egyptians and Arabs have been bashing her on social media. Fans of Gal Gadot have defended the Israeli actress on social media saying “Cleopatra was not black or Arab, she was Greek!”

History tells us that Cleopatra was not Egyptian as many Egyptians have been claiming on social media. Cleopatra was Macedonian Greek, (no not that little Slavic Vardaska country that is now being called North Macedonia outside of Greece). Cleopatra was from Macedonia, in Northern Greece, and part of the Ptolemaic Dynasty of Ptolemy I Soter, one of the generals of Alexander The Great.

After the death of Alexander in 323 B.C., Ptolemy took over the reins of Egypt and began a dynasty of Greek-speaking rulers that lasted almost three centuries. Cleopatra, while not being ethnically Egyptian, followed many of the ancient traditions of her country and was the first member of the Ptolemaic line to study the Egyptian language.

Moreover, members of the Ptolemaic dynasty were incestual. They would frequently marry within the family to maintain the purity of their bloodline. Many of the ancestors of Cleopatra tied the knot with cousins or siblings, and her parents were brother and sister. Cleopatra married both of her younger brothers, both of whom acted as her husband, by following tradition.

Cleopatra has been presented as a sexy temptress as Roman propaganda who used her sex appeal as a political tool, but she may have been more known for her intelligence rather than her good looks. She spoke more than a dozen languages and studied mathematics, philosophy, and astronomy. She was known to be charming and very desirable, however, not as beautiful as Elizabeth Taylor in the classic Hollywood movie.

Some crazy Cleopatra historical facts you may not know:
She wasn’t Egyptian. She was Macedonian Greek.
She later married both of her younger brothers..
She wasn’t as beautiful as portraid in movies.
She had her brother poisoned and her sister executed.
She knew theatrics and how to make grand entrances.
She formed a drinking club with Mark Antony.
She was in Rome when Caeser was assasinated.
Her daily bath required a tub and 700 lactating donkeys.
(Donkey milk was used as an anti-aging procedure. Botox was not around then.)
It is very likey that her parents were brother and sister
She is likely to have died of suicide from drinking poison and not from a snake bite.

Historians have composited a 3D model of what Cleopatra really looked like. She was known to be blessed with intelligence and charisma rather than physical beauty.

Alessandro Tomasi @ATomasi__ on Twitter reconstructs the face of Cleopatra: 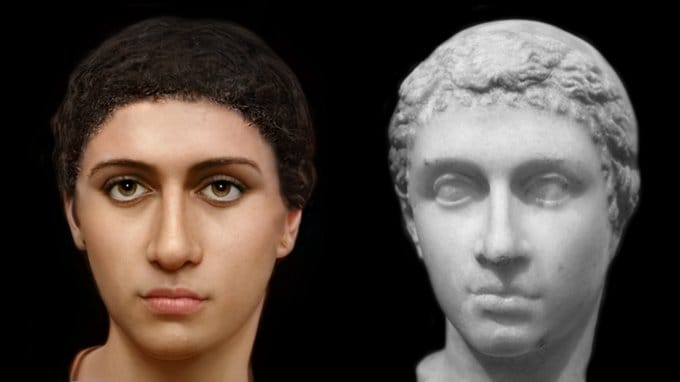