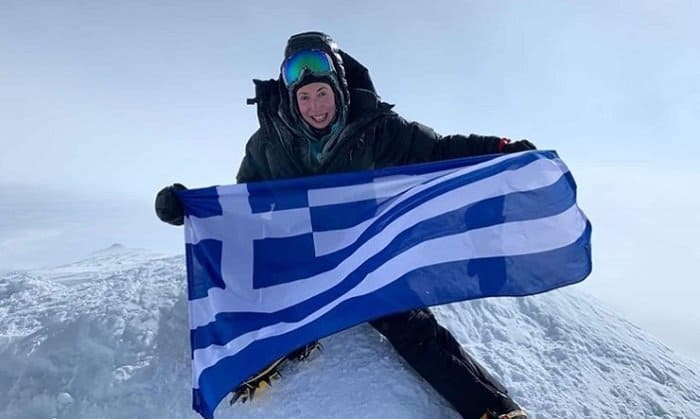 SHARE THIS:
Mountaineer Christina Flampouri hoisted the Greek flag on the highest peak of Antarctica on Monday, January 6th after the triumphant completion of her ambitious “Seven Summits” quest.

Flampouri became the first Greek woman to accomplish this stellar achievement, reaching the final hurdle in her adventure by conquering the top of Vinson Massif at an altitude of 4,892m (16,050 feet).

The Seven Summits are the highest mountains on each of the seven continents. Reaching the top of all of them, which was first achieved on April 30, 1985 by Richard Bass, is regarded as a superlative mountaineering challenge for any climber.

Topping the Seven Summits has become noted as one of the greatest achievements anyone could ever accomplish in mountaineering and climbing.

Flampouri, a member of the Acharnes Mountaineering Association, managed to complete her Seven Summits quest in just 3.5 years.

After conquering the last peak, she remarked “Seven Summits was much more than a mountaineering project for me, it was a dream come true and this confirms my belief that nothing is impossible.

“Five years ago I was scared to step on the edge of a slope — and today I have managed to reach the highest peaks on the seven continents.”