Giannis Antetokounmpo: From the Streets of Athens to NBA Champion

The “Greek Freak” Giannis Antetokounmpo is the new King of Basketball! He went from selling things on the streets of Sepolia, Athens, Greece to NBA Champion and NBA Finals MVP! Along with the Milwaukee Bucks, he scored 50 points in Game 6 and wowed the over 70,000 fans outside with at least 30,000 inside the arena. Giannis and the Bucks came back from being down 0-2 in the series and won the NBA Championship in Game 6 for the first time in 50 years of Milwaukee franchise history. The 2 time MVP in Regular Season, 5 time All Star, won the NBA Finals MVP. The NBA star has come a long way since his humble beginning, from selling things in the streets of Sepolia in Athens to the top of the NBA Championship. Giannis and his brothers grew up in poverty with their Nigerian family.

Many know Giannis is always humble and stays in the moment. He stated at the NBA Final Championship press conference “Obviously I wanted to get the job done,” Antetokounmpo started. “That’s my stubborn side. It’s easy to go somewhere and go win a championship with somebody else. It’s easy. I could go to a superteam, and just do my part to win a championship. But this is the hard way to do it, and we did it.”

Giannis Antetokounmpo has joined the greatest of two-way players in NBA history, as he’s now 1 of just 3 players (Michael Jordan and Hakeem Olajuwon) to ever win MVP, Defensive Player of the Year, and Finals MVP.

Giannis has been very vocal about his Greek pride and love of his birthplace Greece. Not much has been written about the Greek Freak’s religious faith. Giannis has a childhood connection with the Greek Orthodox Church.

Giannis credits his faith in God and talks about his respect for his late father that wouldn’t eat so his kids can eat. In tribute, the “I am my father’s legacy” slogan is on the sole of Giannis’ Nike shoes. Charles Antetokounmpo passed away in 2017 at just 53 years old. Giannis loved soccer and always wanted to be a soccer player when he was younger. 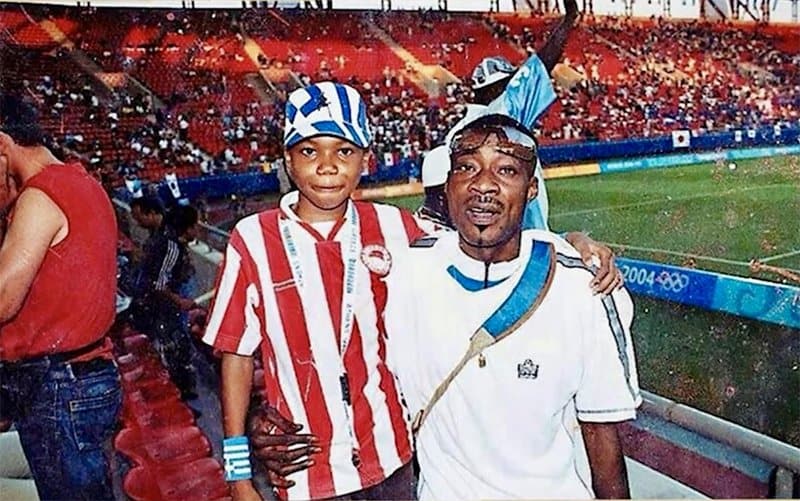 Giannis has served in the Hellenic Army and for the first 18 tears of his life he did not have any citizenship. Neither Greek, nor Nigerian. He gained Greek citizenship in 2013 and his family Hellenized their name from Adetokunbo to Antetokounmpo.

Father Evangelos Ghanas, a beloved priest of Agios Meletios Church in Sepolia, who Christened Giannis and his brother Alexandros on October 28, 2012, had a particular relationship with Antetokounmpo many years ago. Giannis deliberately chose to be Christened Greek Orthodox on “OXI Day,” Greece’s second most important national holiday.

The “Greek Freak” has been praised for his patriotism and respect for the Greek flag; for example, when his Greek NBA fans in the United States asked him to sign the blue and white flag for them, Giannis refused by saying: “We don’t write on the flag”.

Antetokounmpo was the religious connection between his family and the parish. The years he spent at Agios Meletios Church and their Sunday School in the impoverished Sepolia district were significant in developing the young star’s character.

Father Evangelos spoke to the Ethnos newspaper on the young basketball sensation’s character, praising him as an ethical young man who, unlike most of his friends, he never held a grudge against society for his poverty.

“I don’t recall him ever complaining or having a sense of being wronged by life and being aggressive towards society. He may be flying on the court, but in real life I think he stands firmly on his feet. What I cannot forget was Giannis’ gaze. I find it difficult to describe. There was an innocence (in his eyes) but also a hope. No fear and no resentment.”

Father Evangelos said that Giannis liked Sunday School and this helped him build a strong character as a giving human being with optimism for the future. The future is very bright as the NBA star is the first Greek player to be signed by Nike and the highest paid NBA player.

THINGS YOU MAY NOT KNOW ABOUT GIANNIS