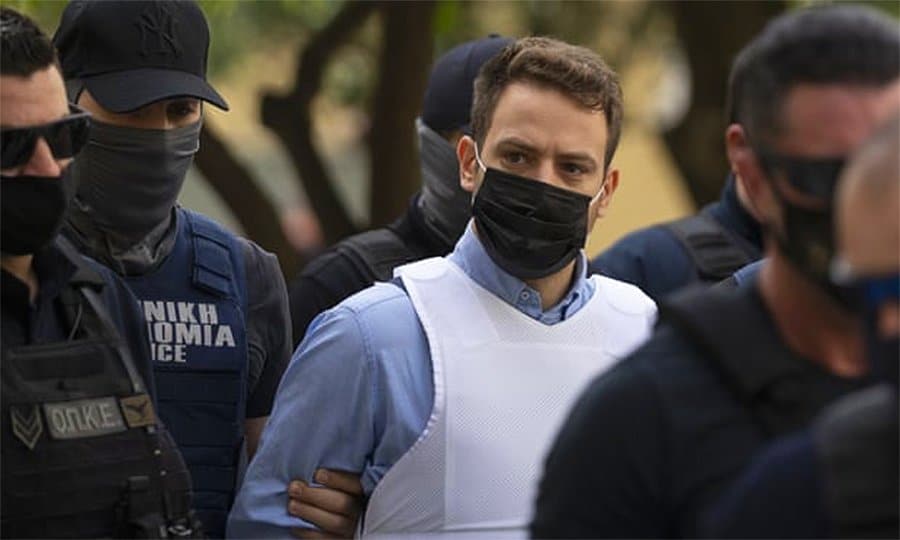 The Greek helicopter pilot killer was charged with premeditated murder in the death of his 20 year old wife Caroline Crouch, as investigators said he admitted to killing her after claiming (for over a month) that she died during a vicious home robbery, that we now know was all staged by him.

Babis Anagnostopoulos, 33, appeared in court in Athens on Tuesday, surrounded by cops and wearing a bulletproof vest. According to the charges, Caroline Crouch, 20, died by being suffocated in her sleep with a pillow on May 11 at their home on the outskirts of Athens at around 4am in the morning.

5 days after his confession the Greek pilot Babis Anagnostopoulos, who is now facing life in prison, attempted to convince justice officials that the crime was “not planned or premeditated.”

Appearing before a court the 33-year-old pilot attributed the killing of Caroline Crouch to “a fit of rage” allegedly induced by a fierce argument. Babis had initially claimed the couple were victims of an armed robbery.

“I am sorry,” he was quoted as saying in extracts of his testimony cited by Greek media reports.

Their 11 month old baby was unharmed, but Greek authorities said the family dog was cruely found choked to death with its own leash.

The murder shocked the Greek nation and prompted authorities to announce a 300,000 euro ($365,000) reward for information about the crime.

Police said that analysis of data from a smartwatch worn by Crouch had helped reveal inconsistencies in the pilot’s account of events. Caroline’s heart rate spike at 3:58am and then flat lined for over an hour before her husband called police.

Anagnostopoulos faces felony charges of premeditated murder and animal torture, as well as misdemeanour charges of giving false testimony and making a false police report in connection with the staged robbery.

If the Greek pilot killer is convicted on all counts, he would face a life sentence.