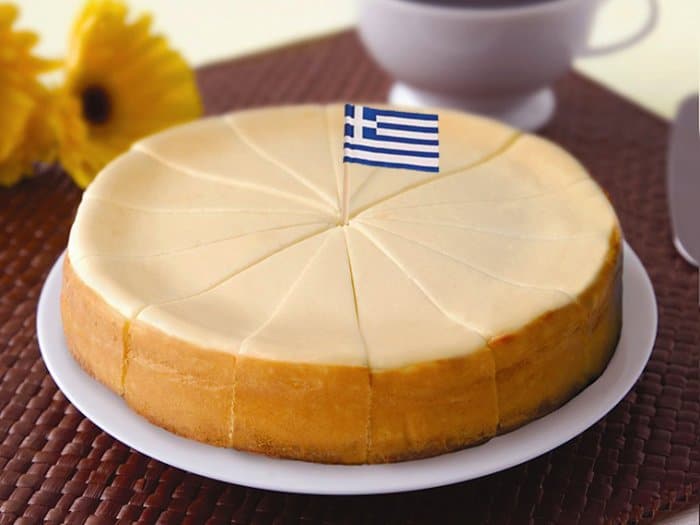 Happy National Cheesecake Day! Yes, June 30th is cheesecake day. No, cheesecake was not invented in New York. Did you know that the Greeks invented cheesecake too? You can probably hear “Ha! There you go!” with a Gus Portokalos voice from the ‘My Big Fat Greek Wedding’ movie. It’s true! The first “cheese cake” was invented on the Greek island of Samos. Cheese moulds dating from around 2,000 B.C. were discovered there by physical anthropologists. Cheese and cheese products had most certainly existed for thousands of years before this, however, anything earlier falls under prehistory (the period of human history prior to the creation of writing), so we’ll never know for sure. Cheese cake was served to the athletes at the Ancient Olympic Games that took place in Olympia, Greece in 776 B.C as a source of energy.

In 230 A.D., the writer Athenaeus is credited with inventing the first Greek cheesecake recipe. (The Greeks had been serving cheesecake for nearly 2,000 years by this time, but this is the earliest preserved Greek recipe!) It was also rather straightforward: pound the cheese until it is smooth and pasty, then mix the pounded cheese, honey, and spring wheat flour in a metal pan. Heat the cheese cake “in one piece” – and then they set aside to cool before serving.

Greeks today have applied their culinary creativity by combining the crispy and savoury sweetness of Greek Baklava and the tartiness of Cheesecake together. This combination is truly a piece of heaven! Shop the Finest Baklava Cheesecake from Serano Bakery in Toronto, Canada!

The cheesecake recipe was one of the spoils of war when the Romans conquered Greece. They modified the recipe by adding crushed cheese and eggs. These components were roasted in a hot brick oven before being served hot. The Romans would occasionally put the cheese filling in a pastry. The Romans called their cheese cake “libuma” and would serve to their guests. Cheesecake recipes were brought to Europe by the Romans as their empire grew. Great Britain and Eastern Europe began experimenting with different ways to make cheesecake their own. Recipes began to take on different ethnic shapes in each area of Europe, using ingredients specific to that location.

The first cookbook was published in 1545. The cheesecake was defined as a flour-based sweet treat. Even Henry VIII’s cook contributed to the creation of the cheesecake recipe. His chef reportedly sliced the cheese into very little pieces and bathed them in milk for three hours. The mixture was then filtered, and eggs, butter, and sugar were added. However, it wasn’t until the 18th century that cheesecake began to resemble how we know it today in North America. Europeans began using beaten eggs instead of yeast to raise their breads and pastries around this time. The overwhelming yeast flavour was removed, making the cheesecake taste more like a dessert. Some Europeans carried their cheesecake recipes with them when they immigrated to America.