At 86 years old, the world famous singer Nana Mouskouri has sold more albums than any other female artist worldwide and has been a Goodwill Ambassador of UNICEF for over 20 years. The beautiful voice of Nana was born in Greece on the island of Crete. We wanted to share a beautiful glimpse of her accomplishments and life with all our readers.

The acclaimed Greek singer and humanitarian Nana Mouskouri has released over 200 albums in at least 12 different languages, including: Greek, French, English, German, Dutch, Italian, Portuguese, Spanish, Hebrew, Welsh, Mandarin Chinese and Corsican. She has sold over 350 million albums worldwide. Nana has a net worth of $280M.

Nana Mouskouri was born on October 13, 1934 on the beautiful island of Crete. Nana and her family where born in Chania where her patera, Konstantine, worked as a film projectionist at a cinema. Her mitera, Alice, worked in the same cinema as an usherette. When Mouskouri was just 3 years old she and her family moved to Athens.

Mouskouri’s family sent her to the Athens Conservatoire with her older sister, Eugenia (Jenny). While Mouskouri had shown exceptional musical ability from the age of six, the more talented sibling initially appeared to be Jenny. The parents, financially unable to support the studies of both children, asked their tutor which one should proceed. The sister conceded that Jenny has the stronger voice.

However, Nana was the one with the real inner need to sing. Mouskouri has said she has only one working vocal cord that was discovered in a medical examination and that this may well account for her extraordinary singing voice (from a dark alto range to a mezzo coloratura), as opposed to her raspy talking voice when she was younger.

The early childhood of Mouskouri was marked by the Nazi German occupation of Greece. In Athens, her dad became part of the anti-Nazi resistance movement. At age 12, Mouskouri started singing lessons. As a teen, she listened to singers such as Frank Sinatra, Ella Fitzgerald, Billie Holiday, and Édith Piaf on the radio. In 1950, at the Conservatoire, she studied classical music. In 1960 Nana moved to Paris.

Mouskouri married twice in her life. At the age of 25 she married George Petsilas, a guitarist from ”The Athenians” trio and the first man she loved and kissed. They had two children: Nicolas Petsilas in 1968 and Hélène Petsilas (singer) in 1970. When Mouskouri was 39 years old the couple divorced. Soon after she began a relationship with André Chapelle who was her record producer. The two didn’t marry because Nana has said she “didn’t want to bring another father into the family” as her Greek background was opposed to divorce. The couple finally married on January 13, 2003, and live happily ever after primarily in Switzerland today.

Humanitarian and Goodwill Ambassador of UNICEF

Nana has been a Goodwill Ambassador of UNICEF for over 20 years. Her work with UNICEF includes meeting with the Kenyan government in 1998 to advocate for child rights. She visited children affected by HIV/AIDS in Kenya. Nana has also visited many other countries like Mexico, Chile, Guatemala, Bosnia, Vietnam, and more. She has said that working with UNICEF is the most rewarding thing she has ever done in her life.

Nana posts photo to her Facebook page as she receives vaccine (January 12, 2021)

“Today was V Day (V like vaccine). I have been in Geneva since the beginning of the epidemic. Two weeks ago I received the state call to register for the vaccination, as one of the people over 75 years old! It was important for me to appear today, to protect myself, but also to respect the health of others. Tenderly, Nana Mouskouri.” 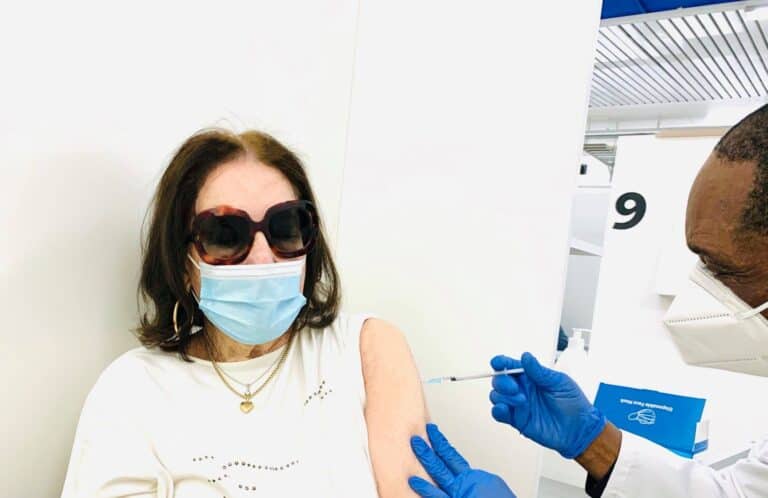