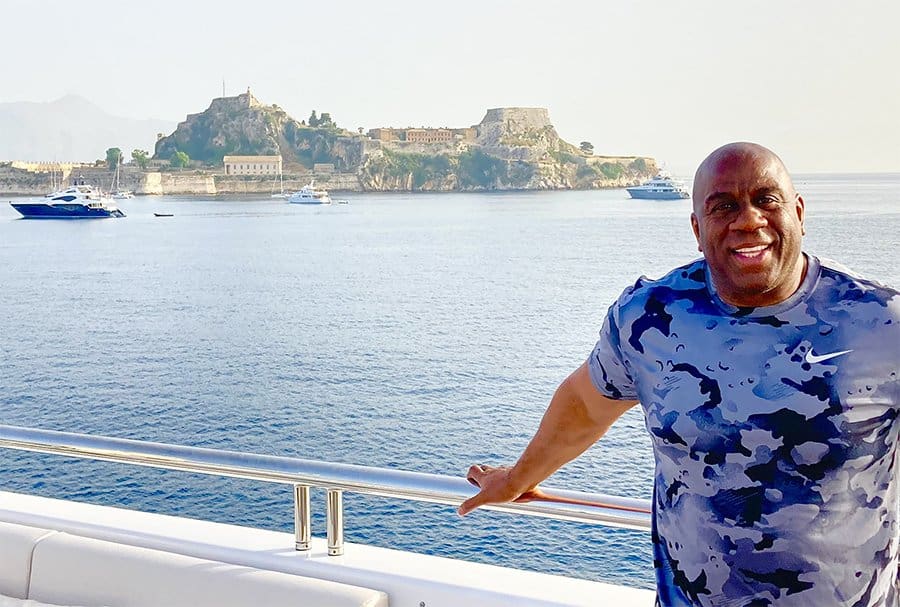 The magical hot summer of Greece is here! So is Magic Johnson! The legendary NBA basketball player has escaped to Corfu island. Greece has reopened to tourists and desperately needs and relies on the tourism for 20% GDP. With 31% of the Greek population currently fully vaccinated (as of June 25, 2021), it warms our hearts to see tourists escaping to the motherland and more celebrities arriving in Greece. See everything you need to know about travelling to Greece this summer.

Daniel Craig, Kate Hudson, and Edward Norton are in Greece and will begin filming “Knives Out 2” in July. Antonio Banderas will also be filming a movie in Thessaloniki. Over 18 films will be shot in Greece for 2021.

Magic Johnson has tweeted “My first day in Greece!”

It takes a lifetime to discover #Greece, but only an instant to fall in love with her. Welcome to the land of magical beauty Magic Johnson!

He has led the NBA in regular-season assists 4 times and is the NBA’s all-time leader in average assists per game (11.2).

He was a part of the United States Men’s Olympic basketball squad (“The Dream Team”) in 1992 which won the Olympic Gold Medal.

Magic Johnson looks great 30 years later after being diagnosed with HIV on Nov. 7, 1991. He has smashed the HIV stigma and has shocked the world with a very healthy look and lifestyle. He visited a 250 year old Greek monastery on Ithaca island and posted beautiful photos on his social media