The Greek Archbishop That Marched With Martin Luther King Jr.

The Greek Orthodox Archbishop Iakovos marched hand-in-hand with the King in Selma, unlike other church figures, where civil rights marchers protested against segregation and for equal voting rights. Such acts were not common, and certainly not covered, back in 1965. “Iakovos was threatened,” says one close assistant and friend of the archbishop, “but he never thought of his decision twice.”

Coretta Scott King, King’s wife, said when Iakovos died in 2005, “At a time when many of the nation’s most prominent clergy were silent, Archbishop Iakovos courageously supported our Freedom Movement and marched with my husband, and throughout his life he continued to support the nonviolent movement against poverty, racism and violence.” 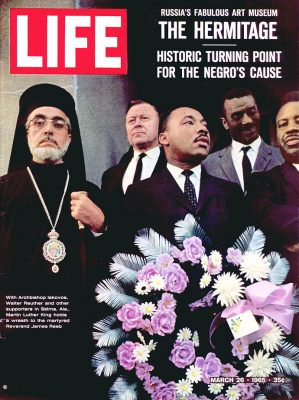 Even before the march in Selma, Archbishop Iakovos had been a strong supporter of the 1964 Civil Rights Act. He stated as the bill was finally passed: “Glory to the most high! May this mark the beginning of a new age for all humankind, an era when the word of God charts and guides our lives.”

He said that the recognition of Orthodox chaplains in the U.S. armed forces and the dialogue he formed with representatives of the Episcopal, Lutheran, Southern Baptist, and black churches, as well as with Judaism and Islam, were among his most proud achievements.

The Greek Orthodox Archbishop was born Demetrios Koukouzis on the Greek island of Imvros on July 29th, 1911. When he turned 15, he enrolled in the Ecumenical Patriarchal Theological School of Halki. This is ccording to the Encyclopedia of Christianity in the US.

Archbishop Iakovos continued to be an advocate of equality throughout his life. In 1980, the 39th US President Jimmy Carter awarded him the Presidential Medal of Freedom.

See the moving video below as Archbishop Iakovos narrates the struggles he faced in 1965 and throughout his life: