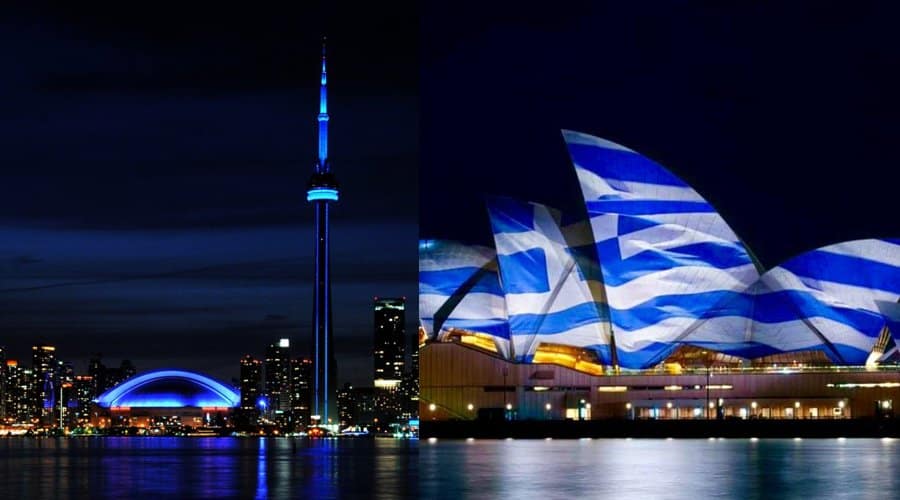 To honour the bicentennial 200 years (1821-2021) since the declaration of the Greek war of independence, on March 25, 2021 many iconic landmarks worldwide will dawn the beautiful blue an white colours of the Greek flag. Some of the iconic landmarks that will honour Greece include: The Sydney Opera House in Australia, Toronto’s 3rd tallest in the world the CN Tower in Canada, North America’s largest waterfall Niagara Falls, the San Francisco City Hall in California, are a few of the many landmarks that have announced they will honour Greece and her fight for freedom from Ottoman rule.

In all corners of the world where Greek Diaspora are present, the anniversary will be marked slightly more muted due to the Coronavirus pandemic that has cancelled many social events. Celebrations typically include large parades in Greektowns around the globe, however, this year celebrations will be mostly virtual and online.

Greek Independence Day is the biggest national holiday for Greeks in Greece, and diaspora around the world. On March 25, we commemorate the declaration of the Greek War of Independence in 1821. It falls on the same day as the Greek Orthodox Church celebrates the Annunciation to the Theotokos, when the Archangel Gabriel came to Mary and told her she would bear God’s son.

Greece had been under the rule of the Ottoman Empire since 1453. On March 25, 1821, Bishop Germanos of Patras raised the revolution flag over the Monastery of Agia Lavra in the Peloponnese, sparking the Greek revolt from Turkish rule. The revolutionary cry “Freedom or death” became the Greek revolution’s motto and the 9 stripes on the Greek flag represent the 9 syllables of “E-le-fthe-ri-a-h-tha-na-tos” meaning freedom or death in Greek.