Gemista is one of the most classic and comforting dishes in traditional Greek cuisine. It’s healthy, hearty, and gluten free! If you’re Greek, your Yiayia or your mom made the yummiest Greek stuffed peppers and tomatoes, or still do. This isn’t the dish Greeks order out in restaurants. Gemista is one of the most popular homemade Greek foods that can be enjoyed all year round. However, nothing beats the flavour of summer fresh from the garden red tomatoes, and yellow, red, and green peppers. This wonderful Gemista recipe is brought to you by Dimitra’s Dishes 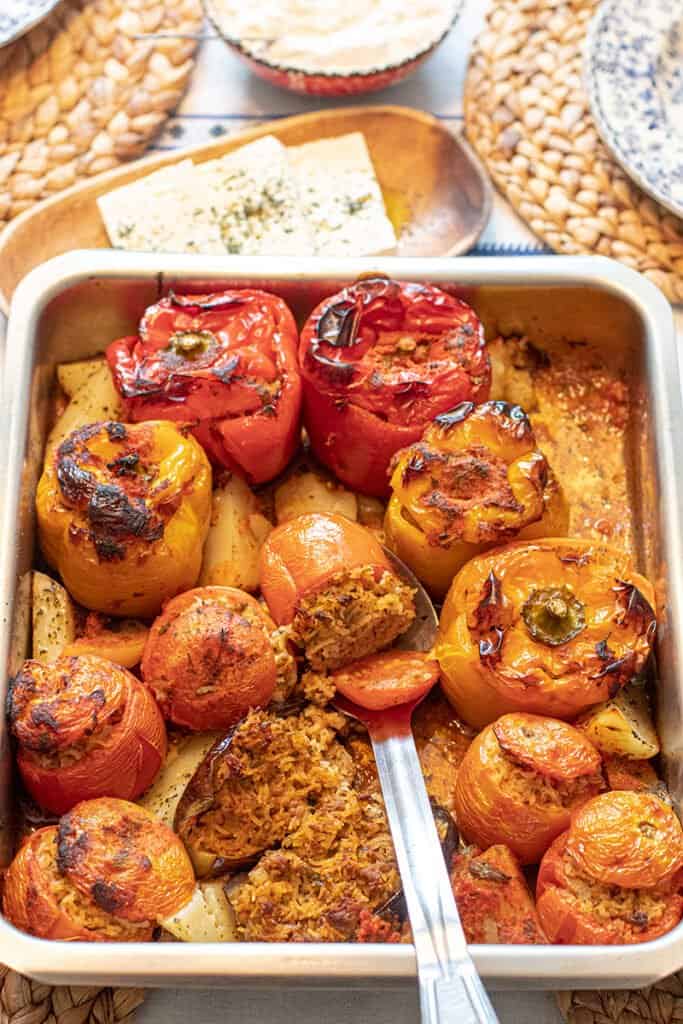 Add and puree the canned tomatoes and pulp into a blender until smooth.

Satay the onions in ¾ cup of olive oil until golden for about 10 minutes. Add garlic and warm through for a few seconds.
Add the 1 pound of ground beef and break up while it is browning. Add canned tomato puree, ¾ teaspoons salt, and pepper. Bring to a boil then reduce heat and cook approximately 15 minutes.
Add rice, 2 cups of water, and a teaspoon of salt and cook for 6-8 minutes on medium-high heat. Do not overcook rice because it will continue to cook in the oven!) Remove from heat and add herbs. Mix well and allow to cool slightly.

Sprinkle some Greek olive oil, oregano, salt, and pepper over the potatoes.

Arrange the vegetables in a deep baking pan with the potatoes placed upwards in between.

Fill the tomatoes and bell peppers with the beef and rice filling no more than ¾ full. The rice will expand more while cooking in the oven. Place the veggie tops overfilling.

Mix in ¼ cup olive oil and ¼ teaspoon dried oregano along with salt and pepper to the remaining tomato puree.

Pour the tomato sauce with seasoning over potatoes. Lightly season the potatoes with salt and pepper.

Drizzle a little more olive oil over the tops of the tomatoes and bell peppers.

Cover with aluminum foil and bake for 1 hour or until the vegetables are nice and soft.

Remove foil covering and raise the temperature to 425 °F, 220 °C. Cook for an additional 30-45 minutes until the vegetables get slightly charred on top and the potatoes are fork-tender.

Let the Gemista cool down before serving. They taste even better the next day! KALI OREXI! (Bon Appétit)