Acropolis Makeover Gets Backlash From Critics

The restoration project on the Acropolis has been met with controversy as critics are accusing the Greek government of ruining the country’s priceless antiquity and cultural icon. Most of the backlash is with a new concrete walkway that was introduced in December, which Syriza leader Alexis Tsipras said constitutes “abuse” of Greece’s most valued archaeological site.

A veteran architect and former member of the Acropolis restoration team,  Tasos Tanoulas, called the new paths “foreign” and “stifling” to the 5th-century BCE monument. Critics say that the walkway was done without the care needed to safeguard a national ancient monument that is for many the emblem of Greece.

The Greek government says it has taken all necessary precautions and that the backlash is politically motivated by opposing political parties. However, others are upset, like some tour guides: “It’s a plateau with potholes. Potholes are the opposite of safe,” noted tour guide Smaragda Touloupa, who recently took her elderly parents on a visit to the site. 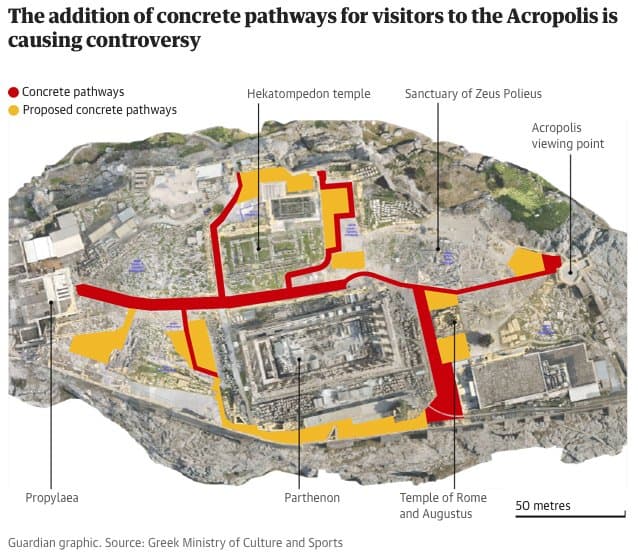 Over 3.5 million people visited the Acropolis in 2019, BC (before coronavirus) The pandemic shut down the world and took Greece from a whopping record 35 million tourists in 2019 to a mere 7 million in 2020. Greece aims to hit 15 million this summer, as travel slowly opens up. Greece is ramping up vaccines with over 2.2 million Greeks being fully vaccinated and 6 million have received 1 dose. (As of June 5, 2021)

What are your thoughts on the new walkway? Let us know in the comments below.

2 thoughts on “Acropolis Makeover Gets Backlash From Critics”