The Greek President of Greece, Katerina Sakellaropoulou, honoured Iakovos Tsounis, the Greek shipowner and World War 2 veteran who earlier this month donated his entire 23 million euro estate to the Greek Armed Forces. The equivalent of $27.9M US.

Iakovos Tsounis was born in 1924, near Patras, in Western Greece. A descendant of Greek warriors who fought in the 1821 Greek revolution and the 13th child in the family. 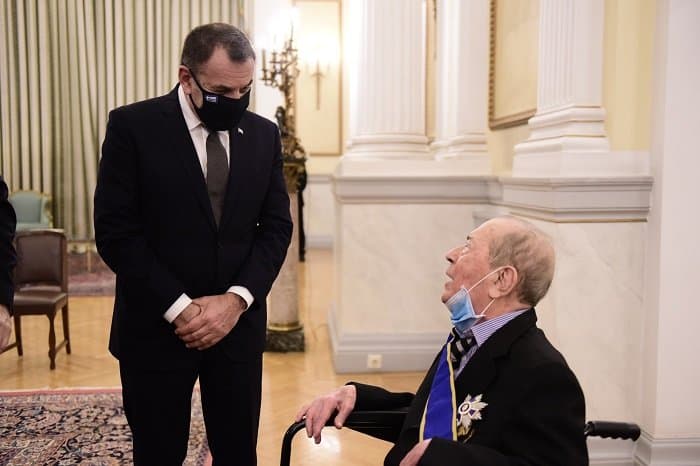 At just 16, he voluntarily joined the Greek Army and went directly to the front line in the mountains of Albania during the Greek-Italian War of 1940. Tsounis is the youngest internationally-recognized veteran of the Anti-Nazi and anti-fascist war. His participation in World War II has been recognized by all the Greek government parties that have been in power.

In a moving ceremony at the Presidential Mansion in Athens, Sakellaropoulou expressed her appreciaition to 97-year-old Iakovos Tsounis and awarded him with the very prestigious Grand Cross of the Order of Honour, one of the greatest of all Greek honours.

“I honour the patriot who was distinguished for his contribution to the homeland since his adolescence, when at the age of 16 he volunteered and joined the Greek army and fought on the Albanian front…a real businessman who did not rest on his laurels…he put himself at the service of those in need, strengthening the work of associations and institutions…a custodian of our cultural heritage, an active collector of national and ecclesiastical relics, which he offered to his compatriots, creating the Museum that bears his name in the city of Aigio. But above all, he is a national benefactor who significantly strengthened the Armed Forces, and intends to bequeath to them all of his real estate. This act is deeply patriotic and exemplary for all Greeks.”